The ceremony is focused around a Stupa (Alter) built by the Sherpas in front of which everyone gathers around and follows through
for nearly two hours. Juniper fire is lit by the side of the Stupa and kept going throughout the
ceremony. Climbers bring their gear and items to be blessed such as climbing boots, ice axe, summit packs,
etc… and place them around the Stupa.

Everyone takes their place on the blankets and the Lama begins with a chant of Tibetan prayers dating back
nearly 300 years. The Sherpas participate in the prayers. In front of the Stupa are offerings such as bread,
snacks, milk tea, beer and Chiang (Tibetan alcoholic drink). Later during the ceremony, a couple of Sherpas
will walk around and start offering the items for everyone’s consumption. Shortly after a pole is raised from the Stupa and prayer flags are strung throughout our Camp, the chants
come to a halt and as if on queue, a small black bird lands on the top of the flag pole. The bird is a
Himalan Chuff and landing on the Stupa pole is considered good luck.

A bowl contaiting blessed rice and flour is passed around for everyone to take a handful. We throw the rice
in the air three times and exchange friendly throws of flour at each other.

Shortly after the flour battle, Climbers and Sherpas gather around arms in arms laughing and dancing the rest
of the way while consuming beer, Chiang and other bottled drinks. 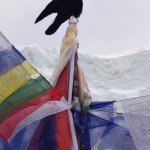 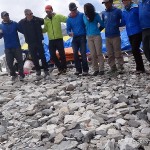