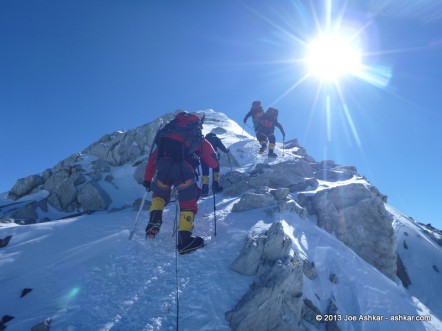 Excitement is in the thin air as Summit Day is here!!! We got up this morning at 7:45 AM for a carbo-loaded breakfast of oatmeal, cereal and coffee, packed our backpacks and were on the trail at 9:25 am. Although it was cold when we got going, the weather quickly got warmer as the sun started peaking from […] 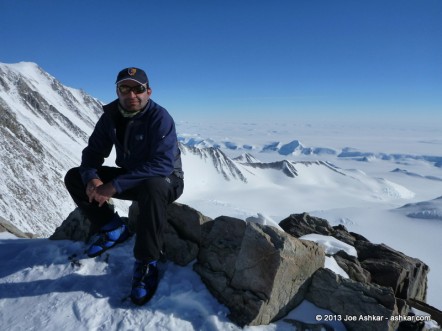 I woke up to a rather unpleasant surprise this morning to find out my 1.5L Nalgene pee bottle cracked in the middle of the night and leaked in a small part of the tent and on my backpack. The temperature fluctuation inside the tent last night and this morning was pretty impressive. While the sun was […]

After a breakfast of scrambled eggs, bacon, hash browns, we broke down Low Camp, packed up our our tents and the rest of our gear and moved up to High Camp. We left at 3:45 PM and arrived at 9:35 PM. Along the way we were treated to spectacular views of the Antarctic landscape under ideal weather conditions. […]

Today is our carry day to High Camp. Since we have lots of gear, fuel and food, it’s a big heavy load to transport from Low Camp to High Camp. The climb is over 1000 vertical meters (3,300 feet) and very steep that requires the use of fixed lines. We can’t use the sleds like […]

Due to high wind up on the mountain, we decided to stay at Low Camp for another day. Since we were up fairly late last night, we slept in a little bit this morning and waited for the sun to hit our tents and warm them up. After yet another leisurely breakfast of eggs and […]

We slept in until noon today as the sun was behind the nearby peaks and later hidden by the clouds, making for very frigid temperature and a wind chill of -35°F/-37°C. We leisurely enjoyed our Sunday brunch with plenty of pancakes. Afterwards we got to work as the wind picked and had to fortify our tents. We cut out some […]